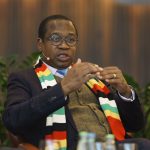 Zimbabwe’s Finance and Economic Development Minister, Professor Mthuli Ncube has expressed delight after being voted and ranked in the top 5 Ministers of Finance in Africa in 2021 by a French publication, Financial Afrik. He said:

I am very pleased to have been voted and ranked in the top 5 Ministers of Finance in Africa in 2021 by the French publication “Financial Afrik”. This is based on a popular vote and qualitative analysis of candidates, and considered by a jury.

The list of the top 5 Finance Ministers ranked in FINANCIAL AFRIK include those of Mauritania, Benin, Nigeria, Zimbabwe and DRC. These ministers were judged to have implemented transformative economic policies with results. Please see page 7.

The publication said about Ncube:

Loosely translated: Former Chief Economist of the African Development Bank, Mthuli Ncube won the battle against inflation and the continued depreciation of the Zimbabwean currency. His next goal is to move his country up to the level of middle-income economies by 2030. In 2022, Harare targets a deficit of 1.5% of GDP. Inflation is expected to remain at 94.6% in 2021 and 32.6% in 2922.

This comes as former Finance Minister, Tendai Biti who is a vice president in the opposition MDC Alliance has claimed that Ncube is one of the worst ministers to ever emerge out of Zimbabwe.

Biti cites the economic crisis in the Southern African country, the ballooning debt, and the suffering of the masses as a result of the austerity measures (that were introduced by Ncube to kickstart the economy) as evidence against the Finance minister.

Ncube was appointed Finance Minister in 2018 and has since then introduced a cocktail of measures to address a number of issues including:

While Zimbabwe is on the recovery path, the country is not yet out of the woods.

Top 5 or Bottom 5 I think there was a typo

What a poor grading system to name characters such as Mthuli as one of the best finance ministers. No wonder nobody knows about the paper 😂

What is going on? In the last weeks Dr. Mangudya was ranked amongst the worst Central Bank governors in Africa. Vanoshanda vese sei manje

Well Well Well, this is good news. Dr Nostro graded C-Graded a better from D-Grade for 2020
and now Prof Vostro now among the top 5.

the reality is that we might be having the good combination for our economy but nkinga iri paOPPOSITION yakadhakwa, or [i dont know wheather its Pesimistic or Optimistic] kaya kakungo gara watoshora usina kana kumbo edza wopinda mazviri

We have Zims in Openning bsnss in foreign lands without even,giving it a try locally. pliz lets bring whatever we are doing in foreign,lands home totangira ipapo

Rank him on the reality on the ground. Do you remember Mbeki's "There is no crisis in Zimbabwe when we were sleeping at the Banks. Let us Zimbabweans judge him.

CONGRATULATIONS TO YOU PROFESSOR MTHULI NCUBE. INDEED IT HAS BEEN A CHALLENGING ROAD AND IT STILL IS AS MANY STILL DOUBT YOUR CAPABILITIES I AM CERTAINLY POSITIVE WE WILL AS A COUNTRY REACH THE ASPIRED MIDDLE INCOME ECONOMY BY 2030.

Should we believe Biti or France......i don't know

Believe yourself look around you, see for yourself

😂😂😂 Thank you for pointing that out. Nobody gives a damn about a falsified paper anyway, the whole world knows Mthuli is shit