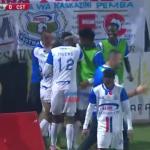 Tanzanian-based Zimbabwean striker Prince Ncube scored a brace in Azam’s 4-0 win over Green Warriors on Wednesday, a development that boosts the Warriors’ preparations ahead of the Africa Cup of Nations finals.

Warriors coach Norman Mapeza had already lost Brendon Galloway, Marshal Munetsi and Tendai Darikwa to injury and Dube’s return to fitness is a silver lining on the Warriors’ hopes of leaving their mark at belated 2021 AFCON finals in Cameroon due next month.

Dube’s agent Gibson Mahachi expressed excitement over Dube’s return from injury, saying it would be a bonus if the former Highlanders striker is called up for the AFCON finals. Said Mahachi:

I am happy that he is back and he scored. If he is selected (for the Warriors) that would be best for him.

He will be the happiest man but what is important for now is that he has bounced back.

If he is selected for the AFCON finals, it would be a bonus for him.

Dube missed Zimbabwe’s six World Cup qualifiers as he was sidelined by a hamstring injury and abdominal pains.

In his last game in national team colours, which was an AFCON qualifier at the National Sports Stadium in November last year, Dube scored the all-important goal in a 2-2 against Algeria.

Mahachi said Dube went “through hell” after he suffered an injury when several high-profile clubs on the continent were making inquiries about him. He said:

It has been tough what the player has been going through and you can imagine the kind of support that he needs.

He was going through hell and when you get injured it is a step back.

He got injured when he was at his peak and there were a lot of inquiries on him.

I made sure I supported him and made him believe.

Prince is a very good player and can score goals .Norman give this guy a chance

Prince is a very good player and can score goals .Norman give this guy a chances

The Star is back ,We need you Prince