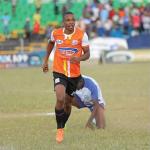 Warriors striker Prince Dube has returned to training at his Tanzanian side Azam, the club announced on Tuesday.

Dube had been on the sidelines for several months due to injury and missed key 2022 World Cup qualifiers for the Warriors but he is now ready to play football.

Azam announced the development via posts on their social media channels. The club said:

Our striker, Prince Dube, has started light training and is ready to return to the field for competitive matches.

He had the operation in Cape Town in September to treat a sports hernia injury.

According to Soccer24, Dube was initially scheduled to return in late October but the medical issue got complicated and was given more time to recover.

He is now expected to make his long-awaited return to the pitch when Azam host Mtibwa Sugar on Tuesday next week.

Please get fully well. We know you are a good player Prince Dube.

To be frank and honest mawarriors dei zvebhora vambomira until ZIFA is in order FIFA does not like government to interfere with soccer that is why they don't find football in Zimbabwe . CAF funding government interfere they give boy useless zim bond ivo vapiwa maUSD more over they always fail to pay back their travel expenses that is bullshit

The prince is way better than Khama....just wait and see

My KEY player at AFCON

Preparations for the AFCON are at an advanced stage

Welcome back Khama 's successor. You are our last hope