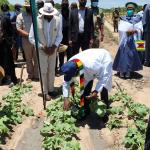 The scheme seeks to transform horticulture through increased access to potable drinking water to 10 million people living in rural areas.

Speaking on the sidelines of the launch of the Presidential Rural Development Scheme, Masuka said:

When the project is in full swing 700 000 villagers will be employed daily throughout the country in addition to the 140 000 youths who will be employed directly. There will be many services associated with this programme.

This is an exciting phase in the transformation of our country and the rural economy as we create source businesses.

We are also going to employ 35 000 youths to manage the schemes under this programme in the next two years as we roll out this programme.

Under the Presidential Rural Development Scheme, each of the country’s 25 000 villages in communal areas and 9 000 villages in resettlement areas will get a borehole among other things. Added Masuka:

Each village will have a village borehole with safe drinking water which will also become an economic enabler to enable the village to engage in meaningful horticulture.

We are currently focusing on communal areas for now so that no one and no place is left behind.

Mnangagwa has an obsession with big numbers.😂😂😅 Even if it means losing the credibility of his words he doesn't give a damn

There are millions of unemployed graduates these toenda kumusha kumagarden how can we migrate from urban to rural Card R.G Mugabe said the truth when he was toppled . He said vese vasingashandi muchaenda kumusha and it's happening started on the first lockdown all those who went to the rural areas never returned

Itai mushe vhurai ma industries we can't b all farmers

I have the right to remain silent