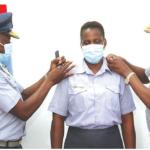 The President made the promotions in terms of Section 15(1) (b) of the Defence Act, which allows the president, on the advice of the minister acting on the recommendation of the commander,” to promote or temporarily appoint an officer to a higher rank.

The latest promotions follow last week’s ceremony which saw two senior officers being elevated to the rank of Air Commodore and six rising to the Group Captain rank.

Conferring the new insignia to the newly-promoted servicemen, AFZ Chief of Staff Operations Air Vice Marshal Biltim Chingono said it was an appreciation for the job the officers perform in defence of the country’s aspirations. He said:

The State greatly appreciates the duties you perform bearing in mind the immense responsibility bestowed on you. These promotions are also a reminder to all of us here that it is the prize placed on hard work and sacrifice.

Let it be known that efforts of this nature are never in vain, but always recompensed by more, it is also an encouragement for you to continue to excel and strive for the next level I know that through the requisite staff development training you have been equipped with, essential knowledge and skills to positively contribute to the growth of the organisation and the country at large.

He called on the newly-promoted to continue with their exemplary culture of hard work.

Among the promoted officers is Wing Commander Tawanda Zowa, who distinguished himself in air power at the Joint Command Staff Course Number 33 at Zimbabwe Staff College in 2020.

Ndege dzine basa strek in today's wars and so also are missiles.thats why you see these super powers buying new planes yearly.