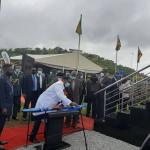 President Emmerson Mnangagwa was on Tuesday likened to God during the unveiling of the Zimbabwe Defence Forces Heritage site at the African Liberation Museum site in Harare.

Institute of African Knowledge (Instak) chief executive Kwame Muzawazi described Mnangagwa as a “Genesis Chapter One” leader in reference to the Biblical narrative of the creation of the universe where God spoke the Earth into existence. Said Muzawazi:

We would like to thank you for being a Genesis Chapter One, kind of a President. In Genesis, Chapter One says God said let there be light and there was light.

Where you say let there be a museum, there is a museum Your Excellency. This is the Genesis Chapter one of the Presidency.

Speaking at the event, Mnangagwa thanked South Africa after Pretoria pledged to facilitate the return of the country’s stolen artefacts. He said:

My administration welcomes the commitment by the President of South Africa … to facilitate the repatriation of artefacts that were removed from Zimbabwe by the (Ian) Smith regime. More artefacts are also expected from across Africa and beyond.

Mnangagwa laid the foundation stone at the African Liberation Museum and received artefacts of the late Vice President Joshua Mqabuko Nkomo that will be displayed at the museum.

US$0 Harare
Ungwas 5 months ago

From a theological perspective, if someone is said to be " a Genesis chapter 1 fellow"it implies that he is one who fulfills what he says, not a god or like God. Ndapashaya panoratidza kuti anzi ndiMwari or akaita saMwari.

What has he ever fulfilled?. Thats why I always say that it's difficult to support the man without looking like an idiot 😂

Please point were he was said be God.