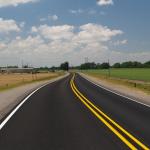 Minister of Information, Publicity and Broadcasting Services, Monica Mutsvangwa spoke said the road is important to the horticulture farming community of Chimanimani and Chipinge.

The Jopa-Kopa highway is the major route that links Chipinge and Chimanimani districts where horticulture is the main source of livelihood.

She also emphasised the importance of other road projects being done by the government in enhancing productivity across the country.

The completion of the 23-kilometre stretch was reportedly delayed by incessant rains that also caused landslides and diverted the flow of a number of rivers.

The delays were also attributed to the resistance of the local community and motorists who at times were not patient enough not to use the road while it was still under construction.

Many road networks were destroyed by Cyclone Idai which swept through the Eastern and Southern parts of the country in 2019.

The government declared all roads in the country a state of emergency saying that they need to be rehabilitated as they had become deaths traps.

Yaaa zvirinani but 2 ways uuuuu these niggas should be uptodate with technology. We are kure kure kure

US$12.00 Chitungwiza
ITAI ZVAMANGAMUCHINGOITA 6 months ago

haa guys kuloncher hake road nhasi but it was being used for some months im sure up to 11 then its a one way that can not accomodate 2 trucks ounce.eveEven the round about its only for honda fit so nothing for a man who call homself President to celebrate

haa guys kuloncher hake road nhasi but it was being used for some months im sure up to 11 then its a one way that can not accomodate 2 trucks ounce.eveEven the round about its only for honda fit so nothing for a man who call homself President

This second republic doing well when it cones to infrastructure but people are hungry hey,look at what happened in Zambia,Uncle Lungu did good roads,airports,clinics e.t.c but left the people hungry and he paid dearly on election day.

You can say that again

23km chete,come one give us a longer highway!

With your surname i do assume uri we kanyi so you should know kuti that stretch cant get any longer.