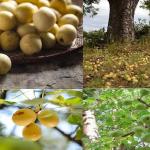 The President accompanied by Vice President Constantino Chiwenga was shown various products from the marula fruit such as edible oils and juices inside the plant that was built by the National Biotechnology Authority of Zimbabwe.

National Biotechnology Authority of Zimbabwe employees showcasing some of the products from mapfura/marula at the Rutenga plant.

The plant is one of the flagship Government projects in Masvingo province that is set to stimulate socio-economic development.

Before touring the plant the President had first planted the marula/mupfura tree at the entrance of the factory.

Also accompanying the President is the Minister of Higher and Tertiary Education,Innovation, Science and Technology Development Professor Amon Murwira and several other Cabinet ministers.

Mapfura is an indigenous fruit that is abundant in Mwenezi and neighbouring areas such as Mberengwa.

Locals have traditionally been making wine from the fruit but on a small scale.