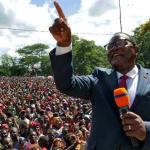 The grouping hinted that the Office of the Cabinet and President should respond to their concerns regarding social-economic challenges Malawians are going through.

The demonstrations which were endorsed by the Centre for Democracy and Economic Development Initiatives (CDEDI) started from Lilongwe Community Ground. They were under the theme “Reclaiming a better Malawi.”

Speaking after the demonstrations, Movement leader, Phunziro Mvula, said they will hold mass demonstrations if their grievances will not be answered.

Mvula added that they want the office to address the rise in the cost of living due to heavy taxes and levies and the newly imposed Value Added Tax (VAT) on banking services.

He further said that government should also fulfil its promise of creating jobs and also uplifting local farmers.

We want our government to condemn corrupt activities by Malawians of Asian origin and to stop offering jobs to retired personal at the expenses of young and vibrant youthful professionals. They should address its failure and uplift health and education services.

We also protested against failure by government in the fight against corruption as evident by the abuse of MK6.2 billion and the issue of creation of new constituencies which will just put another burden on our already frail and fragile economy should be addressed.

The group also wants Chakwera and his administration to address the issue of cabinet and unwanted presidential advisors.

Lilongwe City Council (LCC) Deputy Director Administration Hudson Kumphanga received the petition, therefore, assuring the group that their concerns will be sent to the office of the president and cabinet as soon as possible.

Chakwera pledged, in his preelection campaign, to address issues bedevilling the country but observers say the issues continue unabated.

Munhu arikuguta nechinhu anonetsa kutaura naye GNU yakafaya Kani .Biti finance Chamisa IT and postal service , Education Coltat,kumusoro Richard the trailblazer Tsvangirai ,Not forgetting the political guru R.g Mugabe baba Bona .Paifaya Apo takambodya varume ngatitendeyi vana vavamwe team iyi yanga yakapenga alongside Chinoz kkkkkkkk .Ukasvora izvi kkkkkkkkkkk uuuu you are are a nincompup, numbskull, puppet,idiot, misguided, psychologically deranged, woodlice,and the devil himself .God changes things for a reason who are you to stop that you can buck like a dog nothing is going to change the winds of change have arrived welcome to the future work up and smell the fresh sea breeze coming .

US$75.00 Harare
Douglas Kaliwoh 6 months ago

A lot of good has happened under Chakwera. They are also completing projects which were started and then abandoned by previous governments. People and organizations are free to air their views with demonstrators accompanied and protected by the police service. I do not know if this media and the people here know that there was a demonstration by pro abortion activists who marched and presented their petition a few months ago. It is maturing democracy in practice, and their petition, just like those of previous demonstrations, will be accepted and be looked into.

@Jombo,ideologies that don't bring food to the table are worthless.We don't need Revolutionaries anymore,we want nation builders and Economic boosters.Trump a billionare with his ideology was thrown away .As for Zimbabwe we need new blood in that Throne.
#Ngaapinde hake mkomana.

@Beastboy why do u say that someone needs to be educated if he shares a different point..... Its not about our education but our different political ideologies

It very important to note that The current president of Malawi Mr Chakwera, was opposition only less than 2 years ago.He got into power through promising people of Malawi milk and honey and accusing then incumbent Mr Mtharika of economic mismanagement.Now he is the ruling one and mr mutharikas party is now the opposition.
When Mr Chakwera rose to presidency , Zimbabweans were behind because he was opposition and they said change is finally sweeping over malawi.
Fast forward less than 500 days later , my fellow zimbos are rallying behind the now opposition and demonizing the incumbent ,mrchakwera who was their darling recently!
Lesson learnt.. when opposition mentality and demon grips you it will twirl your brains and always see things in an antagonistic way.And that will make one remain opposition forever.
I'm brilliantly sure that they will be wailing sooner than later in Zambia.Thats african opposition for you , promising heaven when they know they are hungry 😂

Kkkkk I don't think Obama, Trump and Biden combined would fix an economy in a week

This is ER good decision people of Zimbabwe we HV our rights....