President Biden Was Eager For A Chat With Me, Says ED 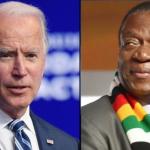 President Emmerson Mnangagwa has said United States of America President, Joe Biden, instructed his staff to ensure that he had a chat with him (Mnangagwa) at the ongoing COP26 Summit in Glasgow, Scotland.

Speaking in an interview with journalists in the United Kingdom on Wednesday, Mnangagwa said the hostile conduct of the US Embassy in Harare is shocking considering he had cordial engagements with Biden. He said:

I had an opportunity to chat with President Joe Biden and the spirit, which he has towards Zimbabwe is totally different from what we see from the US Embassy in Harare.

In fact, he called a staffer and said ‘please make sure that I have a chat with the President (referring to President Mnangagwa)’.

Mnangagwa said he also spoke about three times with UK Prime Minister Boris Johnson and believes the engagement will help improve relations between Zimbabwe and the UK.

Mnangagwa’s arrival in Scotland on Sunday evening was the first visit by a Zimbabwean head of state to Britain since the late former president Robert Mugabe met with Tony Blair in Edinburgh in 1997.

Mnangagwa said he spoke with Prince Charles, the one who lowered the Union Jack, as a sign of the end of colonisation in Zimbabwe.

He said he asked Prince Charles why he had not come back to see the development that has taken place since then.

Mnangagwa said he had an interesting chat with Canadian Prime Minister Justin Trudeau whom he asked “what wrong have the people of Canada done to Zimbabwe and vice versa”.

Trudeau reportedly promised to send a minister to Zimbabwe to reboot relations between the two countries.

Secretary of State for the Holy See, Cardinal Pietro Parolin, who is the top Catholic diplomat, told Mnangagwa that the Vatican was unhappy with the sanctions imposed on Zimbabwe.

Mnangagwa then asked him to convey a message to Pope Francis that he should condemn the illegal sanctions.

US$4.00 Harare
Madala Banda 6 months ago

This was staged managed😂😂😂😂