President Biden Says US Will Defend Taiwan If China Attacks 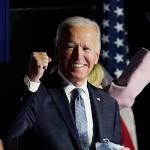 United States of America President Joe Biden has said the United States would come to Taiwan’s defence if the island were attacked by China.

Biden’s comments have been viewed as signifying the US’s departure from its longstanding policy of “strategic ambiguity”.

Asked in a CNN town hall about defending Taiwan, whose government has been under mounting military and political pressure from Beijing, which claims the island as its own, Biden said, “Yes, we have a commitment to that.”

The US has for years maintained a policy of “strategic ambiguity” under which it provides key military support to Taiwan.

America does not explicitly promise to come to Taiwan’s aid in the event of a Chinese attack.

The White House later told reporters that US policy on Taiwan had “not changed”. A spokesperson said:

In August, a Biden administration official said US policy on Taiwan had not changed after the president appeared to suggest the United States would defend the island if it were attacked.

Earlier this month, President Biden appeared to suggest there was an “agreement” between China and the US over Taiwan.

Only an idiot would believe in these empty words. both china and taiwan share the same language. how can they not solve this issue without american interference. surely they just need a testing ground for their new weapons.

US$0 Harare
nahoreka 7 months ago

....this is very commendable. Infact I expect all nations to join together and denounce China and other non democratic rogue regimes like our very own ZANU here.

War is destructive. No one has ever won a war - both the Victor and the defeated - suffer varying degrees of loses.
Let's,therefore, respect the sanctity of life, and give every human being the chance to live life fully; be it a soldier, or civilian. Life is Life.

Very true indeed,we are sick of these needless wars.America destroys and then just runs away...loook at Iraq,Afghanistan and Syria,nothing good came out of it.

Vatanga vanhu Vaya manje. They want to test their weapons in Taiwan. Shame. The people of the republic of Taiwan must wake up. They mustn't be like Afghanistan where they did what they like for 20 solid years and went back to America leaving Afghan people in shambles. Trying to go to America bordering on top of a plane. Some falling down. TAIWAN TO BE THE BATTLEFIELD OF AMERICA AND CHINA WILL BE THE SUB TOPIC FOR SECOND ARTICLE ABOUT THIS I KNOW. YOU WILL SEE. Who is America on Taiwan?. What is China planning to Taiwan for?. Why is America selecting to help Taiwan?. How many American soldiers died in other countries fighting for non tangible facts?. Why don't America help China in a good manner not to fight Taiwan?. What is the fight going to commence for?. Why don't we just have only one peaceful decade worldwide?. Why are 3/4 of the wars that are being fought in this world always include THE WEST AGAINST THE MIDDLE EAST/CHINA AND RUSSIA?. When it comes to you, you only have the ear of words not what you did in Iraq to combine 36 nations to fight the little Iraq and you devastated the beautiful Iraq and raped it's women for free. This also in Afghanistan. Now you are planning for Taiwan also. SHAME.

TAIWAN REPUBLICANS MUST LEFT ALONE. THERE IS NO WAR IN TAIWAN. If you think of fighting on your own, take out Taiwan.

BRITAIN observed your style very late and left you with that influancive way pretending to help yet you want devastate, leaving people in hunger, poverty and your unpayable debts that will last for centuries.

Probably the worst is about to come. Wars are unPreventable at this stage of the world. We ought to be engrossed with that fact. Legally Taiwan has the right to defend itself from China, whether using its resources or external ones, in this case "U.S as the external resource". Let's be rational about this, Taiwan is a small state, obviously if its under UN it has equal rights to be protected not by U.S only but by all member states under the UN umbrella. With that in mind we ought not to forget U.S political nature, its so Distructive, we can term it enemies of progress. If Taiwan doesn't trade carefully it will be another classical case of Afghanistan.

You are the biggest fool i know that exists so far that can speak English. Bloody idiot. China is trying to takeover Taiwan. This is undemocratic. Taiwan is the one that asked for help from the US. You are an idiot