Premier League: 80% of players have had two Covid-19 vaccines 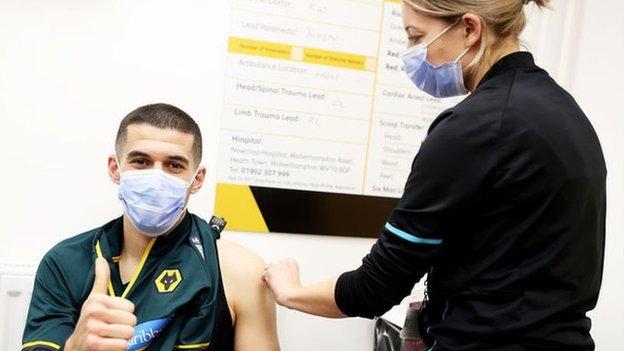 The Premier League says 80% of its players have received two doses of Covid-19 vaccines - up from 68% in October.

The figure is above the national vaccination rate for the most relevant comparable age group in England.

In December, the league and UK government urged footballers to get vaccinated.

A series of matches had to be postponed because of outbreaks of the virus at clubs.

A total of 85% of Premier League players have received at least one vaccination.

Figures published last week showed the NHS vaccination rate (single dose) for 25 to 29-year-olds in England as a whole was 81.7% and for two doses 74.2%. The average age of a Premier League player is 27.1 years old.

Data from the Premier League, published in October, showed then that 81% of Premier League players had had at least one jab, while 68% had been given two doses.

On Monday it was announced the number of positive Covid-19 tests among Premier League players and staff had fallen for the fifth consecutive week.

"The League continues to work with clubs to encourage vaccination among players and club staff, as well as promoting the government's public health vaccination messaging," the Premier League said.

There are no official figures for vaccination rates in Scottish football, while in the English Football League 69% of players had received at least one dose, according to figures published in December.

GOOD LADIES AND GENTLEMEN, THE BUSH LAWYER HAS NOT BEEN LOST IN ACTION. I AM ATTENDING TO A SERIOUS DOMESTIC PROBLEM. [NOT A BEREAVEMENT ANYWAY]. I AM JOINING YOU SOON.

Ok BUSH LAWYER hope everything will be sorted

It's alright Bush Lawyer. Hopefully everything will be fine.

US$125.00 Harare
Stranger From the Forest 3 months ago