Pregnant Girls Flock Back To School 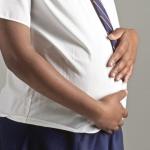 The Ministry of Primary and Secondary Education has recorded an increase in the number of pupils returning to schools in Manicaland Province after dropping out for various reasons.

Early pregnancies and fees challenges were cited as the major factors that contributed to pupils dropping out of school.

A high number of girls fell pregnant during the lengthy national lockdown necessitated by the COVID-19 pandemic and forced the closure of schools, Manicaland Provincial Education Director, Edward Shumba, revealed. He said:

From the survey we have carried out, indications are that many girls and their boy peers are back in school after having been out at some point.

The other reports I am getting also show that a sizeable number are already continuing with their studies.

We had to carry out an outreach programme to sensitize communities that girls could actually get back into school after falling pregnant.

Nothing bad apa wangu. I just wish the ministry will bring the girls exams lapers during the period they be on maternity break not leave this in this case

US$20.00 Harare
Nyasha ndhlumbi 7 months ago

Its bad influence. No sex b4 marriage

That's great ,All glory to God , Im happy for that situation

IAM HAPPY TO HEAR THIS IN ZIMBABWE THAT PREGNANT GIRLS CAN NOW BE BACK ON BENCH. THANKS TO THE MINISTRY OF EDUCATION FOR THIS OPTION BUT IS THIS NOT GONNA INFLUENCE THOSE WHO WERE NOT PREGNANT NIT TO RESPECT PREGNANCY DURING SCHOOL. WHAT WILL HAPPEN WHEN ONE WILL BE PREGNANT A MONTH TOWARDS EXAMS AND ALSO BIRTH, WILL SHE GO TO THE MATERNITY LEAVE AND COME BACK FOR EXAMS OR HOW ARE YOU GONNA WORK IN THIS?. MORE TO BE DONE!!!!!.

Kkkk no one have ever been influenced to be pregnant. Its ones fault