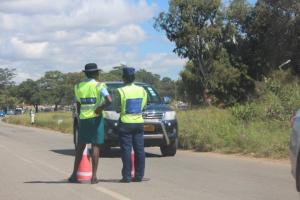 Dynamos coach Tonderai Ndiraya’s Ford Everest has been impounded by the Zimbabwe Republic Police (ZRP) for not having number plates.

ZRP launched an operation on Saturday targeting unregistered vehicles and those without number plates, saying they were being used by criminals in the commission of rapes, armed robberies, kidnappings, among other crimes.

Soccer24 reported a source as saying Ndiraya’s car, which he got from the club’s sponsors Sakunda Holdings, has been taken to Borrowdale Police Station. Said the source:

Yes, the Police impounded Ndiraya’s S.U.V. He was stopped along Borrowdale Road and the vehicle did not have number plates, so inevitably, it was impounded.

Ndiraya and his Highlanders counterpart Mandla Mpofu got the luxury SUVs as part of Sakunda’s sponsorship package for the two clubs, unveiled in December last year.

Since the onset of the operation on 15th January 2022, a total of 5 841 motorists have been accounted for.

The Zimbabwe Republic Police applauds the public for the cooperation which has been received by officers throughout the country in enforcing the law and bringing sanity on the country’s roads.

… The Zimbabwe Republic Police, therefore, reiterates that all vehicles not displaying permanent number plates should be parked whilst awaiting the necessary registration process.

It is a fact that police investigations have shown that vehicles with no registration plates are being used to commit robbery, murder, rape, kidnapping, unlawful entry as well as hit-and-run road traffic accidents in the country.

Who is supposed to acquire plates for this vehicle? The coach, Dynamos FC or Sakunda?

US$0 Harare
Tafman 4 months ago

Munhu hake asi some people are more people than others. If a coach from a big institution like Dynamos FC struggles to obtain those number plates in almost two months,what more
Of an ordinary fella. But the government has been waffling that they got more than enough plates. Who is fooling who here🤷