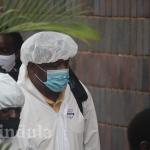 The Zimbabwe Republic Police (ZRP), is refusing to release the broadcast equipment they seized from prominent journalist Hopewell Chin’ono’s Harare home in 2020.

Police arrested Chin’ono in July 2020 on charges of incitement to commit public violence through posting tweets denouncing looting and corruption by well-connected political elites and their cronies.

Chin’ono, through his lawyers Mtetwa and Nyambirai Legal Practitioners has written to the ZRP, asking for his equipment to be released but his pleas have fallen on deaf ears.

The lawyers wrote to the police on 1 October 2020 and 16 December 2020 requesting the release of Chin’ono’s equipment.

On 21 July 2020, you seized our client’s cell phone, camera and other associated articles purportedly in connection with a charge of incitement to commit public violence.

We write to advise you that that charge has been declared to be a nullity by the High Court of Zimbabwe in Hopewell Chin’ono v Regional Magistrate V.P. Guwuriro N.O. & Anor HH 690/21.

Now that there is, in fact, no pending charge against our client with respect to the articles seized the illegality of your continued holding of those articles is further compounded. Our client reserves his rights in that respect.

Please kindly respond to this letter within seven (7) days advising when our client can come to collect the articles.

Posting on Twitter this Friday, Chin’ono said ZRP is yet to respond to the letter even though the seven days have elapsed.