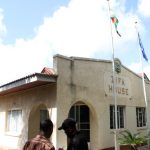 The Zimbabwe Republic Police (ZRP) is set to move in to secure the Zimbabwe Football Association (ZIFA) offices following the suspension of the entire ZIFA board by the Sports and Recreation Commission (SRC) on Tuesday.

Reports suggest that the suspended board members have instructed the secretariat to destroy paperwork that contains possible incriminating evidence in a case of abuse of funds.

The SRC suspended the Felton Kamambo-led ZIFA board, which will soon be replaced by an interim committee to run the affairs of the association until fresh elections are held.

ZIFA is alleged to have instructed referees not to officiate at Premier Soccer League matches that should have run between Tuesday and Thursday.

They are also alleged to have instructed workers not to report for duty, paralysing operations and smooth proceeding of soccer matches in the country.

NewsDay reported a source as saying the police are now involved and they will, among other things investigate the board members, who include vice president Philemon Machana, for fraud and money laundering.

The SRC accused the ZIFA board of failing to account for the money that was raised by the government ahead of the Africa Cup of Nations finals in 2019 and arrests are imminent for all board members.

Football fans are worried that the latest dissolution of the board could invite FIFA’s sanctions which may result in the Warriors losing their right to participate at the belated 2021 AFCON finals in Cameroon this January.

Zifa was Zifa during the good days of Job kadengu and others the guys were proffesionals not this bunch of thieves fattening their pockets at the expense of Zim soccer SRC should get to the root of all scandals happening at Livingstone house.

I apologies to you all the football fans in this country. I was about to resign but i couldn't make it since this 🙄 ruling came as i was still strategising my resignation.I fell ashamed for failing