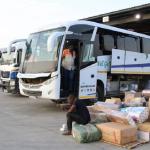 With reference to the recent social media post which went viral on the 3rd of November 2021, on alleged bus crew and passengers who protested alleged corrupt order by members of the Security Services at Chicago area along Harare-Beitbridge Rd. The Police set the record straight and reports that buses were indeed involved in smuggling acts and were impounded after a tip-off had been received from concerned citizens.

The listed buses and vehicles were then handed over to ZIMRA to ensure the appropriate customs and excise laws were applied:

• Munhenzva bus registration number F203BF GPV with Trailer ABB 1317, had suspected smuggled groceries and two (2) passengers without passports who were charged for exit by evasion.

• Nissan Caravan registration number AEP 4454 with suspected smuggled goods was picked by a drone and intercepted by Mounted Units.

• Nissan Caravan AFD 7102, with smuggled goods was intercepted at Pande Mine 2.

We warn bus operators and crew against smuggling and also raising unsubstantiated allegations in order to get sympathy from the public. Bus Operators are now posing a security risk with the border jumpers whom they are carrying into the country and with no COVID-19 protocols being followed at all. This militates against the Government’s quest to fight the COVID-19 pandemic. The Police will ensure that the law takes its course without fear or favour.

Meanwhile, the Zimbabwe Republic Police and other Security Services will ensure that action is taken on any security services member involved in corruption.

"Meanwhile, the Zimbabwe Republic Police and other Security Services will ensure that action is taken on any security services member involved in corruption" Who will ensure that when you are all hungry because of the meagre RTGS salaries which you supplement by these corrupt activities. Ofcos there is no excuse for corruption and crime in general but layo i goverment should pay its workers a reasonable salary.