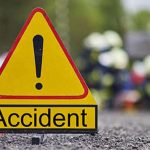 The Zimbabwe Republic Police has announced the names of the victims who died in a road traffic accident that occurred on 17 November 2021 at the 169 km peg along Harare–Bulawayo Road.

The accident happened when a ZUPCO bus heading towards Harare, had a head-on collision with a fuel tanker that was travelling in the opposite direction.

According to Senior Staff Officer (Press, Public and International Relations) to the Commissioner-General of Police, Police General Headquarters, Assistant Commissioner Paul Nyathi, six of the eight victims were positively identified by their next of kin as listed:-

Meanwhile, the names of the remaining two victims will be announced in due course.

Police also urge drivers to be very careful with night driving. Bus operators are implored to comply with safety measures put in place by the Government in order to save lives on the roads.