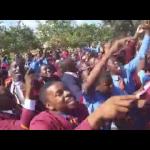 Forty (40) pupils from Gokomere High School were on Monday taken to Masvingo Central Police Station where they were detained before being released after the intervention of human rights lawyers.

In a statement, the Zimbabwe Lawyers for Human Rights (ZLHR) confirmed that the pupils were released from police detention. ZLHR said:

40 Gokomere College students who were taken from their school premises this morning have now been released following [ZLHR’s] intervention.

The [Officer-in-Charge] advised that if need be they will go after the “ring leaders”. The students were accused of staging a protest at school.

It is not yet clear what the students were protesting against but the incident comes barely a month after pupils at Mashoko Mission High School Bikita District, went berserk and destroyed property including the head, Trynos Mbwirire’s vehicle, prompting the Zimbabwe Republic Police (ZRP) to deploy the Riot Unit to the school.

The irate pupils reportedly destroyed windowpanes at the classrooms and uprooted carrots from Mbwirire’s garden.

The pupils had several grievances, among them the school’s failure to supply electricity for the past seven days and the unavailability of running water for several weeks.