Police Concerned Over Murder Cases In The Country 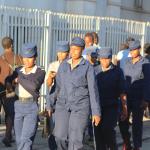 The Zimbabwe Republic Police urges the public to value the sanctity of human life, shun violence and respect the laws of the country.

Disputes, disagreements or any form of misunderstanding between relatives, friends, workmates or other members of the community should be resolved in a peaceful matter without resorting to the use of weapons to either injure or kill another person.

On 15th December 2021 in Gwanda, a team of four (4) unknown suspects believed to be illegal miners attacked Ephat Sibanda (30), Brian Moyo (31) and another male adult only known as “Shorty” with axes, iron bars and knobkerries all over their bodies after the victims had allegedly kidnapped and tormented, Prince (NFPK) and Faith Moyo who are said to be boyfriend and girlfriend.

The victims who were known machete-wielding gangsters in the area died due to the injuries sustained in the attack.

In another murder case on 17th December 2021, the Police arrested Mthokozisi Ndlovu (24), Petros Dube (38), Thabani Maphosa (40) and Graduate Ngwenya (23) all from Tsholotsho in connection with the murder of Good Ndlovu (44).

On 16th December 2021 at 1300 hours, the four (4) suspects who were practising as ‘Tsikamutandas’ kidnapped, assaulted and tortured the victim with logs and hot iron bars, forcing him to confess. The victim later died due to the injuries sustained.

Police in Manicaland are appealing for information that may lead to the arrest of Mike Zinyembe (27) of Chirengwa Village, Chief Chiduku, Rusape who attacked Nicholas Chirengwa (34) with stones twice on the head and the victim died on the spot.

The victim, who was a member of the Neighbourhood Watch Committee, was in the company of two other witnesses intending to effect an arrest on the suspect on Stock Theft allegations. The suspect turned violent and attacked the victim. He then ran away.

In a suspected ritual murder, on 04th December 2021 at 1200 hours, Audrey Mufaro Murira (5) was playing with her friends when the suspect, Philmon Chikata, a male adult of Messengers Camp, Nyanga passed by.

Audrey Mufaro Murira followed the suspect calling him her friend. The suspect then took away the victim and disappeared.

Searches for the child were fruitless only for her remains to be found at the base of a mountain in an advanced stage of decomposition. The suspect has since been arrested and confessed to the brutal killing of the minor.

The Zimbabwe Republic Police will arrest all murder suspects and ensure that they face justice through the courts.