Police Accused Of Assaulting And Killing A Budiriro Man 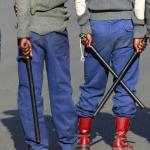 Police have been accused of fatally assaulting and killing an unarmed civilian in broad daylight last Saturday in front of children and members of the public in Budiriro.

The deceased, Percy Dick, was buried on Wednesday following the fatal assault.

Dick had left home for a routine medical check-up but was never to return after the assault.

His mother Christine Chatitima told Standardpeople that she was in shock that her son died at the hands of law enforcement officers. She said:

My son was beaten up by plain-clothed police officers at Current Shops in Budiriro. What happened is the police officers blocked the vehicle which was taking Percy to see a doctor over a leg problem.

As the team tried to ask the police to clear the way a dispute arose and my son was attacked by the police. He died at the scene.

An eyewitness, who only identified herself as Chihera, said an angry female police officer grabbed Percy by the privates and pulled him until his eyes turned white. She said:

She pulled him by the private parts and dragged the poor man. We saw his eyes rolling until they were all white. This happened in broad daylight and they killed him while we watched.

Angry community members and the family have teamed up to demand justice by putting up posters inscribed ‘Justice for Percy,’ ‘End Police Brutality.’

There are allegations that police attempted to attribute Percy’s death to Covid-19 and later to diabetes as they tried to cover their tracks.

Percy, a 31-year-old man, is survived by two children and a 25-year-old wife.

Police spokesperson Assistant Commissioner Paul Nyathi, said police were still waiting for full investigations on the circumstances surrounding his death before they could fully respond.

Nyathi said that post-mortem results did not show that Percy was murdered, and therefore, it would be too early to comment.

Police yagara madhoti muno very rude evil and arrogant the time shall come to pay back.

I AM IN PAINS AS I ACKNOWLEDGE THE DEATH OF MY YOUNG BROTHER'S SON IN LAW. YES, PERCY DICK WAS MARRIED TO MY YOUNGER BROTHER'S DAUGHTER.

I AM NOT THE FAMILY'S SPOKESPERSON. THEREFORE I CAN NOT GO FURTHER. I ONLY WANT TO CONFIRM THAT THE INCIDENT HAPPENED AND POLICE ARE INVESTIGATING.

[ONE DEATH IS ONE TOO MANY]

These people may be above the Zimbabwean law but unfortunately there is a law that is above All Laws. Time shall come and it will come when we are all answerable to this Law.