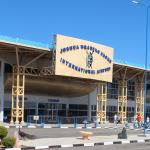 The pilot of a chartered plane left South African DJs, Major League, at Joshua Mqabuko Nkomo International Airport as he could not break Zimbabwe’s aviation and COVID-19 protocols.

The group’s had a show in Bulawayo on Sunday after its gig in Harare on Saturday was stopped by the police.

Business Times reported eyewitnesses and aviation sources at the Joshua Nkomo Airport as saying the Major League entourage had insisted on flying back to Harare at 10 PM after a gig in Bulawayo.

However, the pilot advised the crew of Zimbabwe’s strict aviation and COVID-19 lockdown regulations and prevailing weather conditions as reasons not to proceed with the flight.

Socialite Tazvi Mhaka who is part of the Major League entourage reportedly tried to convince the charter pilot to fly against the stipulated aviation regulations but to no avail. Said a source:

It was a scene at the airport in Bulawayo and the Major League entourage which also included Mike Chimombe who is the President of Affirmative Action Group was looking at flying back to Harare during the night against the country’s COVID-19 regulations as well as the prevailing unpredictable weather.

So the pilot refused to fly at that time which forced the entourage to try and entice the pilot with some money which was rejected in full view of airport staff and some passengers.

The pilot and the aviation firm, who could not be named for professional reasons, reportedly terminated the flight.

The pilot flew back to Robert Mugabe International Airport leaving the entourage stranded at the Joshua Nkomo Airport.

When contacted for comment by Business Times, Joshua Mqabuko Nkomo airports manager Passmore Dhewa said he was not at the airport since it was a Sunday. He said:

Who is the pilot and I was not at the airport it’s a Sunday but I heard that the pilot flew back to Harare.

Chimombe did not respond to messages sent to him through text and WhatsApp, Business Times reported.