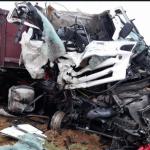 At least two people have died in a head-on collision between a Nyaradzo Funeral Services bus and a haulage truck near Mahatshula in Bulawayo.

ZimLive reports that over a dozen people have been taken to hospital after sustaining injuries.

The accident blocked both lanes on the busy Harare-Bulawayo highway.

A witness said the  Nyaradzo bus driver was overtaking and then slammed into the haulage truck that was carrying bricks.

Below are pictures from the scene of the crash.

US$8.00 Chitungwiza
Pouring Gaga 6 months ago

Where are the pictures