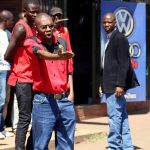 The Zimbabwe Congress of Trade Unions (ZCTU) has claimed that there are men who are stalking Peter Mutasa, the leader of the labour movement.

ZCTU said the unidentified men attended the general conference running from the 27th to the 29th of October 2021. Said ZCTU in a statement:

These two people behind are trailing our president @MutasaPeter at our conference The other one lied that he is a trade unionist and the other says he is a policeman. We remain vigilant and will not allow harm towards our leader.

The congress that was officially opened by the Minister of Public Service, Labour and Social Welfare, Paul Mavima, is held as workers are expressing concern over poor salaries and poor working conditions.

ZCTU has been pushing for the government to review workers’ salaries and improve conditions of service.

In 2019, ZCTU leaders, Mutasa and Secretary-General, Japhet Moyo received letters from unidentified people that had bullets in them.

The letters were warning them not to organise a stay away on 22 July 2019. The letters threatened to kill the two and harm their families.

The writers of the letters said they had “mercenaries to deal with you once and for all – unless you stop what you are planning”.

Draco bad and bougee 8 months ago

Worthless sheep with no spine