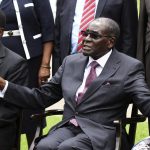 In the picture below is Sybeth Musengezi, a Zanu PF activist who is challenging the legitimacy of President Emmerson Mnangagwa as the leader of the party.

Musengezi has approached the High Court saying the meeting that brought Mnangagwa to power was unlawful.

He wants former Vice President Phelekezela Mphoko reinstated as the leader of the party.

The matter has not yet been heard.

The challenge comes amid reports that Mnangagwa and his deputy, Vice President Constantino Chiwenga are leading competing factions that have left the governing party divided ahead of the 2023 general elections.

So long under this bloody sun no justice...

That's our problem as Zimbabweans we are afraid of dying if we want change then let's be radical ......a good example of radicals are south Africans if they want change they support each other and press on the mission

he is totally right and he needs support