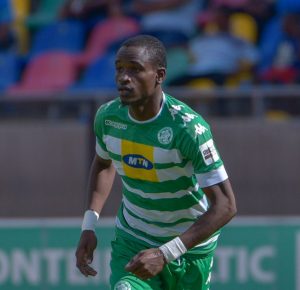 The 27-year-old left-back was unveiled by the Eastern Cape team on Thursday along with his former Bloemfontein Celtic (now Royal AM) teammate Siphelele Luthuli.

Chippa United, who are currently 12th on the DStv Premiership log standings, play University of Pretoria in the round of 32 Nedbank clash on 4 February.

Winning the Nedbank Cup doesn’t only guarantee a huge financial windfall but comes with a ticket of participation in the CAF Confederation Cup. Said Pfumbidzai:

I am very happy, I can’t wait to be in the field of play again, and I would like to thank God for this opportunity he gave me. I also want to thank my family for all the support.

There is nothing new in football but I want to do the best I can to help the team finish the league in a good position and help them to fight for the Nedbank Cup.

I think it’s a good team and everyone knows what the team can do so I just have to work extra hard and see how it goes, I can only do my best and God is the master planner.

Pfumbidzai made his local Premiership debut with CAPS United in 2013 after joining from first division side Hippo Valley.

He had a loan stint at Danish side IK Hobro before he returned home and helped CAPS United win their fifth and most recent league title in 2016.

Pfumbidzai was a key player in the Makepekepe squad that reached the CAF Champions’ group stages for the first time in their history.

He joined Bloemfontein Celtic in 2017 and was with the club until its franchise was acquired by a South African businesswoman Shauwn Mkhize, resulting in the change of name to Royal AM.

Pfumbidzai was part of the Warriors’ squad at the 2017 and 2019 African Cup of Nations.

Ronald has joined the only club I love in S.A