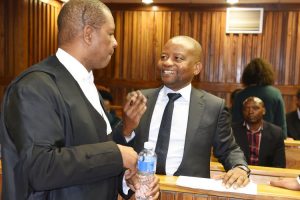 The Johannesburg High Court on Monday dismissed Peter Moyo’s case against Old Mutual, which may be a final blow to the former CEO’s hope of getting R250 million from the insurer.

Moyo sued the insurer for contractual damages amounting to the total he would have earned for the remainder of his contract, had Old Mutual not fired him in June 2019.

The company said he wanted R230 million for contractual damages and another R20 million for the “insults” and impairment of his dignity caused by the statements that the company and its directors made in the media.

Old Mutual filed a court application last week to have Moyo’s case thrown out, with the company contending that there was nothing new in his argument.

Old Mutual said its former CEO was repeating arguments that had already been rejected by the courts before.

Judge Gregory Charles Wright seemingly agreed with the insurer. He found that Moyo failed to produce any evidence to show that Old Mutual wrongfully terminated his contract.

Moyo had brought the damages claim to court because he maintained that Old Mutual fired him unlawfully, even though a full-court ruled otherwise in 2020.

While he won a few rounds against the insurer at the beginning of their public legal battle in 2019, higher courts have rejected Moyo’s arguments.

Moyo even took his fight to Bloemfontein after the full bench judgment in 2020. But the Supreme Court of Appeal turned him down too.

Old Mutual wrote after the judgment:

The Court said it agreed with and was bound by similar findings made by a full bench of the High Court in January 2020, which also found Old Mutual had acted lawfully in terminating Mr Moyo’s contract.

On his claim for loss of dignity caused by the insulting remarks made when he was fired, the court also found no evidence to support this.

With this case thrown out, Moyo is now waiting to hear if he won or lost his application to have Old Mutual directors declared lawbreakers for blocking his temporary reinstatement when the Johannesburg High Court ordered it to do so in July 2019.

Zimbabweans are very stubborn and take time to read the situation. South Africans hate us with a passion. This immigration issue of permits or permanent residence will affect business and even sport. Remember what happened to Tich Mataz he was chased like a dog and he left a nice house in Sandton with a big swimming pool. NEVER PLAN FOR A PERMANENT STAY IN MZANSI THEY HATE US DON'T BE FOOLISH