People Are Thirsty For Change And A Prosperous Country - Chamisa 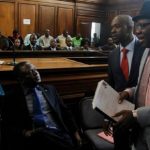 Nelson Chamisa, leader of the opposition MDC Alliance has said the citizenry is yearning for change and a better life.

His remarks come when the country is facing political, humanitarian and economic crises that have worsened the masses’ standards of living. Chamisa posted on Twitter:

THE EXODUS MOMENT… People are thirsty for change and a prosperous country. We’re suffering too much. It has not been easy. Those benefiting from this oppressive system will fight us. But enough is enough! We must win & deliver Zimbabwe for change. A New Great Zimbabwe is loading!

His remarks come ahead of the 2023 elections which many say will be influenced by the state of affairs. The socio-economic crisis is characterised by soaring inflation, power cuts, and poor salaries for government workers.

Chamisa is confident that he will defeat and dislodge President Emmerson Mnangagwa from power.

He recently claimed that Mnangagwa is not as clever as his predecessor the later founding leader of Zimbabwe, Robert Mugabe, whom he said had various tactics of winning elections.

Vanhu mombonyasonzwisisa here zvema sanctions here or mongowawata lan Smith was under sanctions asi nyika yaienda mberi wani , plis stop confusing corruption and sanctions in this world there are so many countrys wc are doin good for their pple hence they are also under sanction .. plis musatinyaudze nemasanctions muchiti ndiwo akutadza kuti mutenge mushonga muchipatara kana kuvaka chikoro are you importing bricks from America here kuti mutadze kuvaka chikoro ?recently you bought cars fro the polad band crew worth millioms of $ from tax payers money dai mapatenga mabooks hanty mainge makagona if wea under sanctions tipei gold yu were mining for the past years since hatina kwekutengesera ,to my understanding ngatimirei kuba n be srs kurwisa corruption not a catch and relis game if you care for our future as zimbos
#Lets put people first
#stop corruption
#stop being violent
#Lets do things honestly
#respect rule of law

Ndimi makauraya nyika nema sanctions vanhu veMDC. Apa mukuda mota inodhura isu tisina chekudya. U must donate to us not us to donate 2 u. If u can not take care of yoself. How can u, take care of all the Zimbabweans. Ityai mwari

US$0 Harare
Coming soon 7 months ago

..give them want they want but not too much , make then starve a little , give them somthn take away smthn that is the strategy to keep the country in control ..
Promise them everything , keep on promising them , promises and promises that is also the strategy to gain the support of people

Enough is enough Zimbabweans we are suffering,we now want change in our country. We need political change in this country. What has happened to Zambia this year is also Going to happen in Zimbabwe. We don't have hope for our future because we surviving in a country with poor road networks,poor hospitals, clinics,hyperinflation, decline in industry, poor salaries, and poor schools. We need a change now

Reply Report Abuse
Man of the moment 7 months ago

Keep it up Son, your time is near not by chance bt by God's Grace☘️
"Hallelujah" #Mukomana nga Pinde#