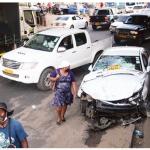 A speeding motorist who drove against traffic while trying to beat congestion, yesterday fatally hit a pedestrian at the Flyover along Seke Road in Harare.

The motorist hit a man who was crossing the road and the pedestrian died on the spot.

The Herald arrived at the scene and witnessed a traffic jam as people tried to come to terms with the horrific accident.

Witnesses said the driver was speeding. Said the witnesses:

The driver of a Toyota Mark X was travelling towards the city centre and against the flow of traffic. He was speeding, trying to beat traffic congestion when the pedestrian was crossing the road.

After hitting the man, the driver of the Mark X collided with an oncoming Honda Fit.

That area is now a black spot. Many people have been killed or maimed there. What boggles the mind is that there is always a heavy police presence who are always chasing after an ill gotten dollar.