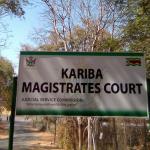 A Kariba-based cleric has been dragged to court by a congregant who he allegedly assaulted for failing to properly clean the church’s toilet.

The pastor, Tonderai Muridzi (32), appeared before Kariba magistrate Tendai Banda on Tuesday facing assault charges and was sentenced to a $20 000 fine.

Muridzi, of Heartfelt International Ministries, beat up Ngonidzashe Makovere (17), a Form 5 student and follower at the church.

Prosecutor Karen Musiiwa told the court that on 7 September 2021, a passer-by asked for permission to use the toilet to which the complainant agreed.

The passer-by reportedly spilt some water on the toilet floor and left without mopping it up.

Muridzi noticed the mess before instructing the boy to clean as he was the one who had allowed the visitor to use the bathroom.

The teenager allegedly complied but as he cleaned the floor an unsatisfied Muridzi confronted him alleging he was not being diligent in the task.

Muridzi started shouting at the boy and started bashing him with open hands and fists, in the process inflicting injuries on the complainant.

The matter was reported at the Kariba police post leading to Muridzi’s arrest.