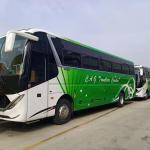 Five armed robbers who had boarded a CAG bus in Karoi on Tuesday undressed all passengers before escaping with the clothes and more than US$20 000.

The incident occurred at around 6.30 PM at the 325km peg along the Harare-Chirundu highway.

The suspected robbers were wielding unknown firearms and fired into the roof and windscreen of the bus to scare passengers and the bus crew.

In an interview with State media, CAG director Sam Nanhanga said the robbers boarded the bus in Karoi on the pretext that they wanted to go to Chirundu. Said Nanhanga:

I am told one of them pretended to be feeling like vomiting while walking in the aisle. He pulled out a gun and fired two shots into the roof of the bus and the other pulled out another gun and shot the screen of the bus.

They then ordered everyone on the bus to remove their clothes and put them in a sack that the other robber was holding. All the men and women were stripped naked.

The challenge I have is that there is a man who was seen by the passengers, before waving for the bus to stop intending to board as a passenger.

When the bus tried to stop, the robbers said if the bus stops they were going to kill everyone.

The man then sped off and reported the incident at a roadblock that was 2km away, which means the incident happened 2km before the next roadblock.

He added that the people who robbed the bus had pistols while their colleagues who followed the bus with a small car had larger firearms.

Zimbabwe has become just like South Africa under the 2nd Republic

Kombi drivers, conductors and hwindis who were rendered jobless by the unjustifiable ban on kombis now resorting to crime such as but not limited to robbery. Also poorly paid security forces now resorting to robbing

The country should increase the manpower for CID Crack Team. Law enforcement officers should be rewarded adequately.

Yes CID inopedza basa. But unfortunately it is some of those serving members who are committing such heinous crimes

Ma CIO emuno vanoswera vachitevera ma opposition figures nema journalists. Their level of unprofessionalism is both alarming and saddening all because of a bad leader

If it were COVID 19 cases, measures would have already been enacted.

Need permission to use the Jonh Wick style need go ahead from the public and I will clean the country .😎😎

It's high time you start considering putting undercover police on each and every bus trip. It's halfway the solution.

Crime statistics should be availed to the public on daily basis as is the case with covid.

All of the 6 armed robbers were arrested.