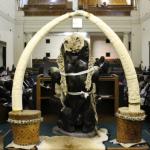 The parliamentary portfolio committee on Defence, Home Affairs and Security intends to summon service chiefs to Parliament to address a recent spike in armed robbery cases involving serving and discharged members of the uniformed forces.

A member of the committee, Retired Brigadier General Callisto Gwanetsa, the former 2 Brigade Deputy Commander, told Business Times that they felt the issue needs to be addressed as a matter of urgency. Said Gwanetsa:

This is a very topical issue, we have compiled all robbery incidents involving members of the security sector.

I have been communicating with the Chairperson of the committee (Retired Brigadier-General Levi Mayihlome), and we intend to call in the commanders so that we get to understand what could be the motive.

We know it is going to cause a lot of talk among parliamentarians and society as a whole, but we are saying we cannot just look and watch as things unfold like that and we will sit as a committee to try and find out what is going on and what could be the solution to that problem.

Gwanetsa believes that poor remuneration could be a major factor pushing members of the security services to commit violent crimes. He added:

The problem is very simple, it hinges on the financial aspect, it hinges on the fundamental issue of conditions of service the security personnel, that is what is driving them to do this but once we talk in terms of such issues, how best do we resolve it, do they get enough of what they have been promised.

The country has witnessed several armed robberies involving serving members of the military, with some of the crimes committed by soldiers on duty.

Are these real soldiers who went through the full training? A real soldier has discipline. On just giving them more money without giving other workeoas well it will make them mercenaries who will perpetually hold the nation to ransom. Do we still have military police to handle their own?

People are just sharing their views you can just do the same you know ?

The PSC has changed the system that was very effective in the early 80s.civil servants used to get two increments in January and July. For some reason this was changed. Now the employer can give increments at any time. A person who has served for 30 years and one on probation might have a difference of 500rtgs.its a joke. The guys at the PSC are clueless. Problem is caused by people in offices who have no standards.

When i talked about this issue kuti the COMMANDERS must answer for the actions of their subjects just this morning somebody said i'm a POVO cant contribute anything, thanks to @Nkust & others who ackowledge good contributions

it is my wish that the COMRADES must explain the root cause of this menace which includes but not limited to SALARY ISSUES.

HOWEVER, parliament may you quiz the security portfolio to try and under stand what is the State of the Nation's security under the prevailing economic situation. i believe they are in a good position to advise Gvt.

SALARY ISSUE not only for Gunners but may the same issue of LIVING WAGES ngaive neutral, zvobata vanhu vese from industry

The jails will be full of forces on which the will be a time when some forces out side the jails will go and rescue to closed and will a exchange of fire on some shakings in the seats will result.

They seem as if there is a hidden agenda circulating in the bases maybe cannot be known by bigger bosses but the middle group may be brewing something.

This is now difficult to stop because they have got the deal to survive a better life now.

MOSTLY IT IS HIDDEN ON SALARIES.

BUT NOW EVEN IF THEY INCREASE THEIR SALARIES, IT'S TOO LATE.

THE HAVE DRILLED A BOREHOLE OF HONEY BY A FINGER

MANY POLICE MEN ARE BUYING CARS, MAKING MONEY AND PRECIOUS LIVES BUT THE SOLDIERS ARE STARVING WHILST AT WORK. THEY SPEND THE WHOLE OF THEIR LIVES IN BASES WAITING FOR SALARY THAT WILL COME IN RTGS AND THEY ONLY DREAM OF FOREX WHILST PROTECTING THE PEOPLE WHO ARE MAKING MONEY THROUGH CORRUPTION.

NO MATTER HOW MUCH WILL BE INCREASED, IT IS NOW DIFFICULT TO QUIT.

WE DON'T KNOW WHAT TO DO BECAUSE THE GUYS ON THE DEAL ARE SOLDIERS, POLICE AND THOSE WHO HAVE AN ACCESS TO GUNS. SO THE POVO WILL BE ROBBED DAILY.

Indeed,the hounourable has put it clear that poor remuneration could be a push factor for these armed robbers. So let's start from there. Give these guys and all civil servants what they are crying for and see if they won't be as patriotic as Sirizanu Butau. 🤔🤔🤷