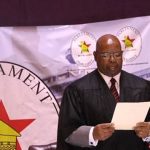 Parliament has raised concern over unauthorised expenditure by the government amounting to $6.8 billion, describing it as an “unacceptable anomaly”.

Jacob Mudenda, the speaker of Parliament, yesterday told a pre-budget seminar for legislators in Victoria Falls that the Finance ministry must regularise the expenditure as a matter of urgency. He said:

This amount constitutes a supplementary budget, which must follow the normal budget approval process by Parliament.

I, therefore, urge the minister of Finance and Economic Development to promptly engage Parliament and regularise this unacceptable fiscal anomaly.

I further demand strict adherence to the dictates of the constitution, the Finance Act, the Appropriation Act, the Public Finance Management Act and any other legislation that attempt to ensure value for money in the budgetary processes of our country.

Auditor-general Mildred Chiri, in reports released in July, said the excess expenditure was done in violation of the constitution.

Advocate Mudenda also said they were also worried that in his mid-term fiscal review, Finance minister Mthuli Ncube spoke of a $570 million budget surplus for the half-year ending June 2021 when most line ministries and government departments had received allocations far below the 50% threshold of the full-year budget appropriations, including Parliament.

Mudenda urged MPs to ensure timeous disbursement of the budgeted funds in terms of Section 119 of the constitution.

Mmmmmmmm I think pindula u should filter some of these comments....pasi ne hate speech

True,where is the surplus,this minister I think is the worst in the history of this country even pre-indepenence era.