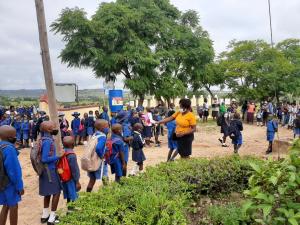 Parents and guardians will have to pay school fees in full for the 2022 first term even though it is a bit shorter as the opening of schools was delayed by nearly a month due to rising coronavirus infections.

Ministry of Primary and Secondary Education spokesperson Taungana Ndoro said the days that have been removed from the first term were added to the second and third terms. He said:

We have had cases of parents who have been asking whether the first term is not too short compared to the second term and third term.

The school fees are approved per term and the days that have been removed from the first term have been factored into the second and third terms, so there should be no challenges with the fees. The fees that are approved will be there.

However, school authorities still need to agree with parents and guardians on any increase in fees to be charged for this term, which would then have to be approved by the Ministry.

The first term starts on Monday, 7 February, and ends on 7 April. The term has 45 school days.

The second term will begin on 3 May and runs for 69 days until 4 August, while the third term will have 71 school days from 5 September to 8 December.

Kkkkkk there is 1 thing you must know Africans covid is real and it is intentionally a war for the world why am l saying this, to begin with a question what are the top power countries in terms of politics economy 1. USA 2. CHINA and so on let me talk about these 2 Covid is from china we all know. Africa is enemy to america and friendly to China and each and every country in africa there's something benefiting for China to prove doubters wrong everyone akaita history muchiri kuziva kadiagram kemaslaves here America ichitora maslaves muafrica for production so and so on ending europe asia watever bt mahistorians vanoziva zvandiri kutaura yakakurisa nyaya yacho saka in short I am saying china mobilised africa backed up by America so their aim is to destroy africans and reign everything it came to pass black death it came to pass HIV bcoz haina kuparadza as expected it came to pass ebola it will come to pass corona bcoz God was in it bcoz it back fired the whole world instead of africa alone

Research for it lets PRAY,WORK,EAT rotationally to survive AFRICA

Report Abuse
The Terraces 3 months ago

It seems as if zvikoro zvavhurirwa kuwana mari through fees.