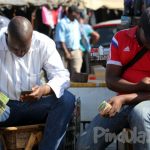 Exchange rates on the parallel market have reportedly gone down in the last two weeks from US$1:$200 to around US$1:$165.

This follows the introduction of a cocktail of measures by the Reserve Bank of Zimbabwe (RBZ) to curb the exchange rate that was rising at a very quick pace.

The dealers also complained over their incapacity to push high volume trades which they attributed to stricter procedures on cash movements being implemented by the banks.

Even the payment of civil servants’ salaries this week did not manage to escalate the exchange rates as anticipated earlier by a section of market watchers.

A prominent economist, Doctor Prosper Chitambara, attributed the shifts to the hard clampdown exerted by authorities this week.

He added that long term stability will, however, depend on the measures put in place by authorities to bridge the gap between foreign currency demand and supply among other factors.

Failure at its awesome best😂😂...

The black market rate can be lower to around 1:100 to 1:110 if the government give its civil servents that USD 50 per week it promised. Kwete kungosasa zvavasingagone that is bad governance

The RBZ is Stitching the anus to heal diarhea

This only occur in short term see what will happen as time goes on we will hit an ex^Rte of 1:zwl 300

US$0 Harare
Chapwititi 6 months ago

So you mean 1USD equivalent to $165ZWL ,the measures of RBZ are yielding positive results,i wonder why the Government celebrates failure.RBZ is the problem in the matrix of foreign exchange rate.

On short term basis I think.what about the long term.leadership crisis in Zim.may God bless this economy.we don't have economists in that government.