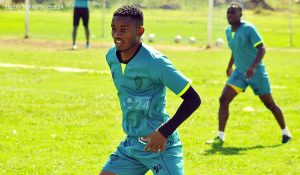 The 32-year-old has been without a club since he was released by relegated South African side Black Leopards at the end of last season.

As a result, Karuru was overlooked for the Warriors squad for the ongoing Africa Cup of Nations (AFCON) finals, where Zimbabwe was knocked out at the group stages.

Karuru, who has played for Gunners and Masvingo United, and in France and Belgium, took to social media to express his delight after being officially presented at his new club on Saturday evening. He said:

Don’t congratulate me…..Just give glory to God because he is the one who made it possible.

When you see me, I want you to see how good God is to those who trust his promises.

Karuru becomes the third Zimbabwean to ply his trade in Saudi Arabia in the last decade after Musona and Tendai Ndoro who both also played in South Africa.

Musona, who is the Warriors captain, plays for Saudi Pro League side Al Taai.

Another flying saucer spotted in Harare

When the mature and humble speak.

"Don’t congratulate me…..Just give glory to God because he is the one who made it possible.

When you see me, I want you to see how good God is to those who trust his promises."