"Operation Restore Legacy Was A Lie, Will Be Reversed In 2023," Makomborero Haruzivishe 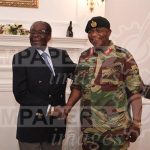 MDC Alliance activist Makomborero Haruzivishe says the “Operation Restore Legacy” of November 2017, which led to the ouster of the late former president Robert Mugabe was a lie that will be reversed in 2023’s general election with his party’s victory.

The former students unionist made the remarks during a press conference in Harare Friday.

He claimed that the real reason for the military assisted transition was for ZANU PF political elites to loot the country’s resources with impunity.

Haruzivishe speaks barely days after being released from prison where he spent nearly 10 months for kidnapping and inciting public violence, charges he denies. He said:

We were told lies that the country’s fortunes were to be protected and turned around, yet this was just a plan to loot and completely destroy democracy in Zimbabwe. There is need to reverse all those lies through legal means and processes.

Whilst in prison, l met some of those people who helped to make the so-called ‘restore legacy’ a success but they are rotting in jail. I learnt that restore legacy was a manifesto of lies, thieving, looting and state capture and to violet people’s rights. Come 2023, let us all register to vote in our numbers. Zanu PF, in 2023 is going.

For the 322 days that l was imprisoned, each day l deliberated on how to remove Zanu PF so l had 322 ideas thought over this period l stayed in prison. I came out strong knowing this party is going. One by one, these ideas will be implemented.

He reiterated that detention or any form of persecution will not dampen his spirit and desire to fight for the enhancement of democracy in Zimbabwe as well as the improvement of living standards for the common man.

Zvakaoma saka imi mose muri pano you are still hoping kuti a pen and a piece of paper will change Zimbabwe😂😂 Imiii!!! Pepukai Zanu was here to stay, No weapon of any means will avail Never Ndaramba. Makamboudzwa wani " Kana ukarota wava President muka ubikirwe doro" In other words Zanu hayibviswe nema Elections chero zvofa zvodiyi. Everyone knows it chero Chamisa anotozviziva ipo paye. The only way out its only one mese munoiziva, Zanu ndeyeropa inobviswa neropa simple. So as long as we still have this cowardice mentality nothing will happen. Either we fight(head on war) or we join Zanu pf those are the two options chete but as we all know it Noone is ready to die for democracy, saka lets join zveduuu Zanu pf because ini handisikuzofira munhu Never🤣🤣🤣

I personally believe that Mugabe is one of the waste Presidents to ever emerge in Africa. What @Makomborero Haruzivishe
is saying is scary. Yes Ed is failing but going back or reversing to Mugabe's regime is a pure nightmare.

The boy is wasting his energy.. Chamisa is the way.. this one akuda kuonerwa chete..

Musaka furira kafana aka, mmmm i feel sorry for him

Keep it up son,we need more strong youths like you,dont be afraid of these looters, lets move with one voice,unity and love of our dear country.Aluta continua!
Ngaapinde Hake Mkomana.