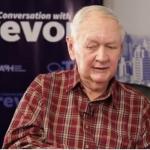 Economist and former Reserve Bank of Zimbabwe (RBZ) advisor, Eddie Cross, says the Government should open up the market for forex exchange in order to tackle parallel market exchange rates that are hurting the entire economy.

The black market exchange rate is currently hovering around US$1:ZWL$200, which is almost double the official exchange rate that was pegged at US$1:ZWL$108 when the last foreign currency auction was conducted on 14 December 2021.

We have a definite problem and, in fact, in my view, this is the major issue, which confronts the Ministry of Finance in 2022.

The only way to collapse what they term BMR (black market rate), is in fact to open up the market for forex exchange and increase the volume of foreign currency being traded.

While the prevailing exchange rate could be benefitting a lot of businesses and forex traders who are likely to frown upon the move, the net effect is negative to the entire economy as it tends to render workers’ salaries useless.

Some banks are not in favour of that and the majority of businesses are making so much money out of the totally distorted situation.

So much that they do not want any changes to be effected. The Ministry of Finance has a very tough job on its hands because they virtually have to decide what is best for the country with the approval of the powers that be of course.

You were there with them and kept quite knowing very well that the auction system does not work and the purchasing power of employees salary is heavily being eroded but why , Eddie,why.You were with them in your short tenure as their advisor right.

WHERE ARE THEY GOING TO GET THE FOREX TO LOAD THEIR MARKET BECAUSE THIS IS THEIR DEAL TO FOOL PEOPLE WITH RTGS AND FILL THEIR POCKETS WITH FOREX.

WE WILL NEVER DEPOSIT FOREX INTO BANKS.
WE WILL STAY WITHDRAWING BECAUSE WE LEARNT FROM THE PAST.

I DON'T THINK THEY WILL ACCOMMODATE YOUR FACT MR CROSS

THANK FOR YOUR HELP. YOU WERE RIGHT BUT IT'S NON OF THEIR BUSINESS

Thus the right way 2 go. But bcoz of high levels of corruption in Zim that Forex Market will be definitely abused by the PEOPLE in POWER. Munovaziva hunhu hwavo kuluta chete chete

The Forex Auction does really work how did it stabilise the rate from period of inception thus June 2020 upto April 2021?

The problem is FIXING if they let it go the same way it went during that period you'll see that though the rate might rise it will find its equilibrium somewhere. And stay relatively stable

RBZ is busy auctioning forex that is not there.Lastin between August and September
,it sold money that was not there.All I am saying is they were waiting for export receipts from companies that would exported and then allot these funds later to companies.Wakambofanodya Mari yausati wabata wakambozviona kupi.A question I would want answered is why this auction system was open to individuals because I wants saw Tagwirei and Anthony Mandiwanza's name being beneficiaries of the system in their individual capacities,I thought it was going prioritize companies and govt departments that were in dire need of forex.Is it not a case of enriching the already rich guys who got the green backs for a song