Omicron Has A Lower Fatality Rate In South Africa - Virologist 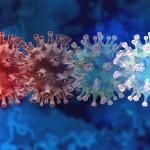 A virologist has claimed that Omicron, a new coronavirus variant first detected in South Africa at the end of November this year, has a lower fatality rate in South Africa because most people there have immunity.

Ben Krishna, a Postdoctoral Researcher, Immunology and Virology, University of Cambridge, says after infection with any virus, the immune system adapts by making antibodies that stick to the virus to neutralise it, and killer T-cells that destroy infected cells.

Antibodies are pieces of protein that stick to the specific molecular shape of the virus, and killer T-cells recognise infected cells via molecular shape as well. Added Krishna:

This is why Omicron is so apparently successful at infecting people with previous immunity, either from vaccines or infections with other variants — the mutations that allow the spike to bind to ACE2 more strongly also reduce the ability of antibodies to bind to the virus and neutralise it.

Pfizer’s data suggests that T-cells should respond similarly to Omicron as to previous variants, which aligns with the observation that Omicron has a lower fatality rate in South Africa, where most people have immunity.

Importantly for humanity, past exposure still seems to protect against severe disease and death, leaving us with a “compromise” where the virus can replicate and reinfect, but we do not get as severely sick as the first time.

Krishna added that “we might have COVID-19 season each winter in the same way we have flu season now.” Added the virologist:

Influenza viruses can also have a similar pattern of mutation over time, known as “antigenic drift”, leading to reinfections.

Perhaps the best evidence for this eventuality for SARS-CoV-2 is that 229E, a coronavirus that causes the common cold, does this already.

I said it before,this covid is dead & gone,remove all these curfews & whatever and let us do business as usual.nxaaa

This covid thing, i once wrote on this platform kuti COVID is gone. I didn't have any scientific knowledge and evidence to prove it but the End of Covid is nigh. She will gradually die starting from this OMICRON.

Some were affected by CORONA 19 through sex but not through the private parts but throjgh ex hailation and skin contact.

Now, a step must be taken to sex workers.

LET US SAY NO TO SEX WORKS

A LOT OF BITCHES ARE NOW MONEY MAKERS AND RICH BUSTARDS

LET US NOT PRAISE SEX WORKS, IT'S EVIL

Kkk unoda vashandepi. Vanodawo kudya ,kuendesa vana kuchikoro.
Hence, saying No to sex works only is not a feasible solution. Come with a solution that may aid these sex workers put food on their tables without selling punanis