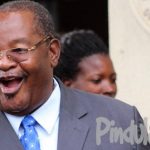 The farm is owned by human rights lawyer Siphosami Malunga and his business partners Zephaniah Dhlamini and Charles Moyo.

Mpofu has reportedly hired armed personnel to keep both the workers and the owners of the farm out.

The trio has, however, been struggling to retain ownership as the State compulsorily acquired the farm in 2020 via a Notice of Acquisition General Notice 3042 that appeared in a government gazette.

Zimbabwe’s laws empower the Minister of Lands, Agriculture, Water and Rural Resettlement to compulsorily acquire land without paying compensation except for improvements.

Mpofu and his wife, through their company, Mswelangubo Farm, were offered 145 hectares of Esidakeni Farm. The farm measures 553 hectares in total.

Speaking during an interview with CITE, Dhlamini revealed that Mpofu had started evicting their workers using the armed guards to keep them out. Said: Dhlamini:

The eviction started on Tuesday. When they moved into the farm, we did a court order and applied to the High Court for them to go.

They applied to the Supreme Court and must have listened to the High Court order but they remained put there.

The procedure is the judgment must be executed pending an appeal, which they must launch from outside the farm.

They hired armed people with guns who are manning the place and are stopping people from moving in.

Even us owners are not allowed to go inside. We understand the armed people are from one security company.

Dhlamini added that their crops which had planted were dying as they are not being tended to. He said:

We have three compounds where our workers stay and they went to one of them and evicted our people.

There is no recourse, as we did try to go to the police, asking them to go put law and order there at the farm but the police said without a court order they cannot do anything.

By the Way we do have land commission and that other One what is by the Way ..... Land au...or land reform 🤔

The return of chombo land

OBERT MPOFU IS BREAKING THE LAW HERE AND MUST BE ARRESTED. THIS IS WHY INTERNATIONALISTS SAY THERE IS NO RULE OF LAW IN ZIMBABWE.

OBERT MPOFU USED LAND REFORM LAW TO FIX MALUNGA AND COMPANY BECAUSE THEY WERE NOT IN ZANU PF, BUT HUMAN RIGHTS LAWYERS.

OBERT MPOFU LOST THE CASE AND WAS ORDERED TO LEAVE THE FARM IN 24 HOURS. HE IMMEDIATELY APPEALED. HIS APPEAL HAS AN EFFECT OF REVERSING THINGS AND PUT THEM AT A STANDSTILL POSITION OR STATUS QUO.

THEREFORE IF OBERT MPOFU IS MANUVOURING NOW, HE IS BREAKING THE LAW. THEY MUST CONTINUE FARMING AS THEY DOING BEFORE UNTIL THE JUDGEMENT OF OBERT MPOFU'S APPEAL IS OUT.

POLICE SHOULD NOT HAVE DECLINED TO HELP THE MALUNGAS. THEY WERE WRONG PROMOTING THE MANTRA THAT THERE IS NO RULE OF LAW IN ZIMBABWE.

This is typical mumusangano makazara malooters. Thus wat they are gud at, thus why they joined the party