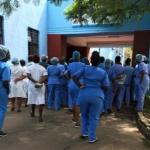 Zimbabwe Nurses Association (ZINA) president Enock Dongo on Wednesday said nurses have rejected proposals to undergo training in patriotism and instead, want a living wage that will naturally engender a sense of patriotism.

This comes after Information minister Monica Mutsvangwa told a Tuesday post-Cabinet media briefing that the Government had approved a proposal to introduce the National Health Service (NHS) training and induction modules for health workers, which will include lessons in patriotism.

Dongo stated that nurses are in the dark regarding the Government’s plans as they have not been consulted. He said:

We believe that anything done without the involvement of a worker is a non-starter. It will not work.

All the workers that I am talking to, including myself, are not aware, and it will not see the light of the day.

Without consultations, it is bound to fail. It’s a waste of time. Right now, we don’t even know what that is all about. I don’t think the government has to do all that.

It just needs to give health workers a living wage and by doing so, it will achieve patriotism and hard work which is beyond the call of duty.

Last year, Vice President Constantino Chiwenga who doubles as Health and Child Care minister decreed that doctors must be recruited as military officers for them to work in public hospitals.

The country’s constitution does not allow members of the security forces to engage in collective bargaining or to join unions.

In May, the Government announced plans to ban doctors and nurses from going on strike for more than three days under proposed amendments to the Health Services Act.

Under the proposed changes, those accused of “inciting” doctors and nurses to strike could be jailed for up to three years.

All we want as civil servants is a normal salary period.