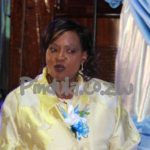 A nurse based at the Angel of Hope Clinic, which is owned by First Lady Auxillia Mnangagwa has been arrested and charged with theft of three COVID-19 test kits worth US$5.

The State, led by Anesu Chirenje opposed bail, saying the accused person was a flight risk and could interfere with State witnesses.

Shayanewako’s lawyer Denford Halimani said he was surprised that the State opposed bail on a US$5 case.

Mangosi initially remanded the accused in custody, but later granted him $1 000 bail.

Shayanewako will appear again in court on 30 November.

The complainant in the matter is Bernard Madzima, a medical doctor.

It is alleged that sometime in May 2021, Shayanewako was in charge of medical equipment at the clinic located at State House and stole three COVID-19 test kits.

A police report was filed, leading to Shayanewako’s arrest.

The State alleges that the stolen property was worth US$5 and nothing was recovered.

US$0 Harare
nyasha 6 months ago