Novak Djokovic Returns To Detention As He Fights Australian Deportation 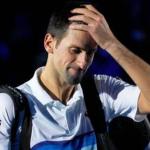 The World’s top-ranked tennis player, Novak Djokovic has returned to detention in Australia after Prime Minister Scott Morrison’s government revoked his visa for a second time amid public outcry over violations of COVID rules.

Authorities declared the unvaccinated tennis superstar a threat to the public.

Djokovic had surrendered to officials in Melbourne for an interview at about 8 am local time on Saturday (21:00 GMT on Friday), following a court order issued on Friday night.

Australian Border Force (ABF) officers accompanied the 34-year-old player to his lawyer’s offices for the online hearing in the Federal Court at 10:15 am local time on Saturday (23:15 GMT on Friday).

His case now moves to an appeals court and a hearing is scheduled for Sunday.

Just two days before the Australian Open begins, the world number one is again fighting detention and deportation – the latest twist in a high-profile row over his COVID-19 vaccine status.

This is the second attempt by Australia’s government to deport Djokovic, one of the world’s most high-profile COVID-19 vaccine sceptics.

The 34-year-old Serbian had used a medical exemption to enter Australia earlier this month, hoping to challenge for a record 21st Grand Slam title at the Open.

This time, the government has invoked exceptional – and difficult to challenge – executive powers to declare him a threat to public health and safety.

Government lawyers are expected to argue that Djokovic’s presence stirs anti-vaccine sentiment in Australia amid a tidal wave of Omicron infections.