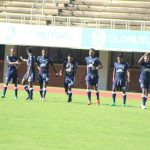 In-form forward Bruno Mtigo scored his seventh goal of the tournament in the second half.

Following heavy rains that pounded the stadium, the match was played on a water-logged pitch for the remaining 20 minutes.

When it started raining, the pitch became unplayable and I thought the match officials were going to stop the game, but they didn’t.

His Ngezi counterpart Rodwell Dhlakama equated the last 20 minutes of the match to “a game of water polo”. Said Dhlakama:

It was very difficult to play the match; it was like we were playing water polo. The ball was not moving, but again it was good for us as we had already scored.

The platinum miners came into the game as favourites as they were runners-up to Highlanders in the last edition of the tournament in 2019 before the advent of the coronavirus disease of 2019 (COVID-19).

Despite the win, Dhlakama admitted Cranborne Bullets gave them a good run for their money. He said:

It was a difficult game, I want to be honest. Cup games are always difficult.

Going into the final for the second year running is something that is very important to me, to the team and to the fans.

In the other semi-final scheduled for this Sunday, FC Platinum take on Harare giants Dynamos and the winner of the tie will face Ngezi in the final.