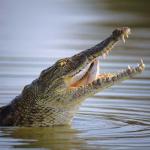 A newly married woman from Mberengwa lost her right leg after she was attacked by a crocodile while fetching water at Mazwi Dam on Friday last week.

According to ZBC News, the woman was about to return home when she was attacked by the vicious reptile.

Her husband’s younger sister ran to inform the husband who was ploughing the fields.

He rushed to the dam and used a log to strike the crocodile which then let go of its victim but not before it chopped off her leg just below the knee.

The woman was quickly taken to Musume Mission hospital some 25 kilometres away where she is currently receiving treatment.

The community is now appealing for financial assistance to cover the woman’s medical bills.

The incident is the second crocodile attack in as many months after a teenager was attacked at the same dam.

Villagers are now living in fear of the crocodiles which have attacked livestock.

Meanwhile, the Zimbabwe Parks and Wildlife Management Authority said 70 people were killed by wild animals across the country this year as cases of human-wildlife conflicts rise.

Zimparks spokesperson Tinashe Farawo said the escalation of human-wildlife conflicts is caused by the growing population of both humans and animal species.

US$0 Harare
Chad 5 months ago

Who is the MP of that constituency? In my opinion, that area need more boreholes.this is no longer the time for the people to rely on water from dams for consumption..use devolution funds to drill more boreholes

Hakuna MP ,he died soon after he was elected.They kill each other for that post