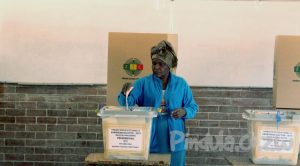 The Zimbabwe Electoral Commission (ZEC) says citizens who currently registering to vote will are not eligible to vote in the council by-elections set for 26 March 2022.

ZEC Chairperson, Justice Priscilla Chigumba, said the Electoral Act stipulates that those eligible to vote for local authority elections are those who have registered before the death or recall of the councillor.

She said for the National Assembly by-elections, the voter’s roll closes two days after the proclamation of election dates by the President.

Chugumba said the current voter registration will be used for the delimitation exercise ahead of the 2023 harmonised elections. She said:

The Electoral Act states that those eligible to vote for local authorities are those who have registered before the death or recall of the councillor.

This is why we are going to have different voters’ roll in the by-elections for local authorities since councillors were recalled on different days.

On the House of Assembly, the voter’s roll closes two days after the proclamation of election dates by the President.

This is what people must know and we are going to educate the electorate at different intervals.

The by-elections are mostly a result of MDC-T leader Douglas Mwonzora’s recall of MDC Alliance’s elected officials, accusing them of joining a rival party – the MDC Alliance led by Nelson Chamisa.

ZEC is deliberately frustrating and disenfranchising new voters / first time voters who have the potential to tip the scales in favour of any political party. The provisions of the Electoral Act cited by Chigumba should be challenged in the constitutional court. ZEC itself was not conducting voter registration and the Registrar General was not issuing IDs for while during the past two years. Some of the recalls and deaths of MPs and Councillors happened in 2020. Now we are in 2022. I think voter registration should proceed for a month after the proclamation date. I also see no reason why first time voters should be barred from voting because the councillor was recalled before they had registered. I hope someone will litigate and challenge these unconstitutional provisions which violate the rights to vote and to political participation.