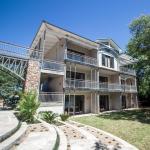 A new 4-star hotel, Palm River Hotel, will be officially opened in Victoria Falls this Wednesday.

Located on the shores of the Zambezi River and more than 6km away from the city centre, Palm River Hotel has 73 rooms.

The hotel plans to let out 30 rooms on 1 December, with 40 per cent of them already booked for December and fully booked over the Christmas Holidays. The other rooms will be opened in April next year.

The hotel has seven blocks, each with three floors. The seven blocks are named after some indigenous trees, Block A being Acacia, Block B (Baobab), Block C (Combretum), Block D (Duiker-berry), Block E (Ebony), Block F (Fig) and The Palm River Villa.

General manager, Martijn van Leent said the hotel will next month bring an expert who is going to name all indigenous trees within the property. He said:

Only three shrubs were cut down during construction, as we kept all the others with the aim of keeping the Victoria Falls touch.

About 180 native trees will be planted on the premises to enhance the natural environment.

Palm River Hotel is owned by Spencer’s Creek Group, which was founded in 1970, and also owns Ilala Lodge Hotel with the same number of rooms.