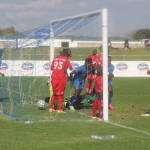 Dynamos coach Tonderai Ndiraya has expressed satisfaction with his charges’ defensive display in the 1-0 win over Black Rhinos on Sunday.

The Glamour Boys sealed a semi-final spot in the Chibuku Super Cup after beating the army side at Baobab Stadium on Sunday afternoon.

Defender Frank Makarati returned to the starting line-up in over a month due to injury and scored the priceless goal for his side in the 57th minute.

Ndiraya said he was not enthused with the way his side performed but was happy with another clean sheet. He said:

We have kept a clean sheet in the 11 games and we hope we can keep the momentum going.

If you keep a clean sheet, then you have a better chance of winning. I’m happy that our defenders are doing well.

I want to be honest that we were not very smart today. We didn’t play good. Of course, we defended well, kept our shape well, but at times, we were not as compact as we were supposed to be.

Of course, I am happy that we scored, we won the game and we are in the semi-finals, but going forward, we need to improve on our performance.

Rhinos coach Hebert Marowa conceded defeat, adding that his team will shift focus to the Premier Soccer League which starts at the weekend.