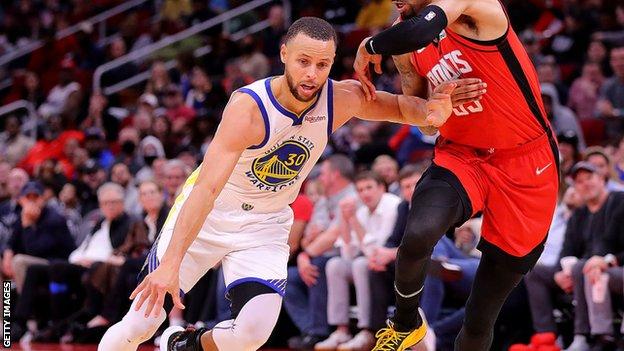 Stephen Curry scored 40 points as the Golden State Warriors beat the Houston Rockets 122-108 to win their sixth game in a row.

The former Most Valuable Player has now scored 40 points or more in six games this season.

Christian Wood hit 24 points for the Rockets, who lost their fourth consecutive game.

Curry has now scored 20 points or more in a quarter 37 times in his career.

Tyrese Maxey scored a driving lay-up in overtime as the Philadelphia 76ers edged the Memphis Grizzlies 122-119.

Maxey, who finished the game with 33 points, drove to the basket with 26.4 seconds left on the clock to seal a fifth win in a row for the 76ers.

Despite All-Star guard Ja Morant scoring 37 points for the Grizzlies, they saw their three-game winning streak come to an end.

The Miami Heat suffered a second straight defeat to lose their place at the top of the Eastern Conference to the Chicago Bulls, falling 122-92 to the Boston Celtics.

Jaylen Brown led Boston with 29 points, as the Celtics picked up their fourth successive win and moved to 27-25 for the season.

Luguentz Dort recorded a team-high 18 points for the Thunder in their first win at home since 31 December.

CJ McCollum top-scored with 21 points for Portland, who fell to a fourth defeat in five games.

Elsewhere, rookie Isaiah Jackson recorded a season-high 26 points and 10 rebounds to help the Indiana Pacers to a 122-116 victory over the Los Angeles Clippers, the Sacramento Kings lost a seventh game in a row as they fell 116-96 to the New York Knicks and the Cleveland Cavaliers scored 27 points in the final nine minutes to edge the New Orleans Pelicans 93-90.

Thank you Pindula for Basketball news.

Wow what a player