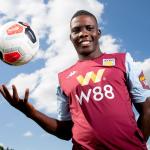 Warriors and Aston Villa midfielder Marvelous Nakamba has been ruled out of the 2021 Africa Cup of Nations (AFCON) finals scheduled to take place in Cameroon from 9 January to 6 February next year.

Nakamba underwent an operation that may keep him out of action for up to 16 weeks after sustaining a knee injury in Aston Villa’s 1-0 defeat to Liverpool on Saturday.

He’s had successful surgery. The surgeon is really happy with his operation and how it’s gone and now he’ll start his recovery process and recovery plan.

Nakamba had regained his starting berth in the Villa engine room since Gerrard took over from Dean Smith at Villa Park.

The 27-year-old played all five games under Gerrard before the injury.

Meanwhile, Zimbabwe has already lost Brendan Galloway and Marshal Munetsi to injury ahead of the AFCON finals.

At the 2021 AFCON finals, Zimbabwe is pooled alongside Senegal, Guinea and Malawi in Group B.